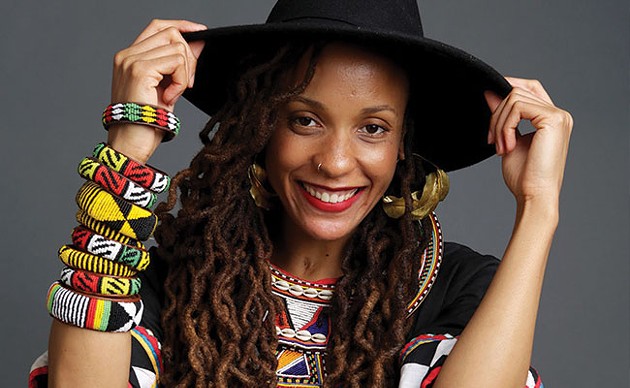 Sa-Roc is arguably one of the most vibrant MCs in the world today. Her crisp articulation, fiery delivery, and her elevated and insightful lyricism has often placed her within the same conversation of some of Hip Hop’s most notable artists. Once dubbed by Okayplayer as “one of the most formidable microphone mavens in the game,” Sa-Roc is an artist for a socially conscious generation.

Sa-Roc grew up in Southeast D.C., at the height of the crack era, with neighborhoods plagued by poverty and disaffection. Her early experiences shaped her understanding of the world around her, deepened her emotional sensitivity and cemented a social consciousness that would later feature heavily within her work. She was born three-months premature and didn’t make a sound during the first fourteen months of her life. This struggle to find a voice — both literally and creatively — would later be critical in shaping her lyrical expression.

There was no lack of early influences; she was raised by an artist father and an avid reader for a mother who would expose their young children to black writers, musicians and performers. She was raised on everything from the syncopated rhythms of hometown Go-Go acts like the Rare Essence and the Backyard band, to the prophetic poetry of Gil Scott Heron and Nikki Giovanni. It was the work of writers like these and more that helped Sa-Roc foster a love for language and writing and while still young, she began to pen her own poetry and short stories. She attended the Sankofa Institute, a Pan African centered school where her writing, social and creative expression was nurtured by Hasinatu Camara, an educator and civil rights activist. Camara would introduce Sa-Roc to close friends like Kwame Ture (f.k.a. Stokely Carmichael) MutaBaruka, and Haile Gerima. It was through these personal encounters that she began to see how artistic expression could be used as a tool to educate, inspire, and create change, a set of principles that she continues to live by.

SOL MESSIAH: Growing up in his hometown of Atlanta, artist/producer Sol Messiah was inundated with the rich and energizing spirit of Hip Hop culture. Getting his start as a breakdancer, Sol Messiah built his reputation as a b-boy before traveling to NYC to join the legendary Rock Steady Crew. Inspired by New York Hip Hop legends, Sol Messiah fell in love with another foundational element of Hip Hop culture: DJing. Spending untold hours mastering the skill, and acquiring the musical knowledge required of the DJ, Sol Messiah was prepared to make the leap into producing records, the next step in his musical journey.