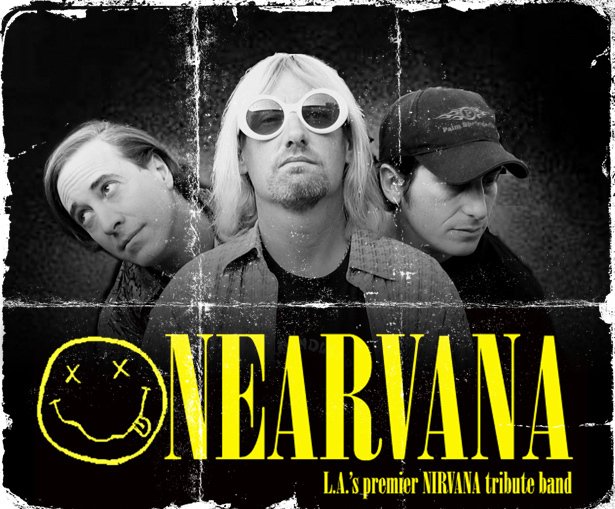 Two different bands paying tribute to the most iconic grunge sounds of the 90’s!! Complete with all the looks, outfits, stage theatrics and sound… Nearvana & Black Daze will give you an authentic 90’s grunge experience!
“NEARVANA” the “Ultimate Nirvana Experience” is an incredible re-creation of the rock band NIRVANA which emulates Kurt Cobain and the group at the height of their popularity, and clearly demonstrates what a ferocious live force they were.

Complete with all the looks, outfits, stage theatrics and sound… Nearvana gives you a high energy simulation of being at a Live Nirvana concert.

NEARAVANA is the FIRST and ONLY Nirvana Tribute to have met the three surviving members of the band. We have the approval and support of Dave Grohl, Krist Novoselic, and Pat Smear!

NEARVANA is the only Nirvana Tribute to be asked to play the historic D&R Theater in Kurt Cobain’s home town of Aberdeen, WA, and was introduced by the head of The Kurt Cobain Memorial Foundation. We also have had the pleasure of meeting Leland Cobain, Kurt’s Grandfather.

NEARVANA plays songs from all stages of Nirvana’s career, and includes songs off every major recording, plus many lesser known bootlegs, imports, and rarities.

First and foremost, Black Daze performs the music of Soundgarden! Many tribute acts will pay homage to the legendary Chris Cornell, playing the majority of hits from Chris’ other bands, but only play a handful of well known songs by Soundgarden. Black Daze goes the extra mile to analyze and perfect the music from all eras of Soundgarden, playing the hits as well as deep cuts from the entire catalogue ranging from the SST/Subpop 80s through Soundgarden’s incredible comeback in the 2010s.

From mastering intricate time signatures, recreating exact tones, using identical instruments and equipment the band used in their heyday, Black Daze brings the most authentic experience you can get to Soundgarden in their prime! They capture the look, feel, and attitude of classic Soundgarden, which is not an easy task! Stomping, screaming, and ripping the guts out of their respective instruments, Black Daze will deliver an explosive and powerful live show that will surely melt your face off!

So grab your flannel and your doc martens and get ready to rock out to Black Daze – the Ultimate Soundgarden Tribute!